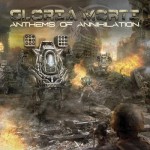 Prelude: “Marching mid-tempo introduction to the theme. Lyrics push you into the world of deceitful world leaders gathering to find a solution for the financial and ecological crisis. The storm is rising.”

Solution Called War: “The fastest Gloria Morti song to date. Brutal vocals and blast-beats combined with the realization that the world as we know it is from now on in the hands of war machines.”

Awakening of a Discordant Machine: “The melodical yet aggressive single of the album reveals you the queen of the machines. Guitar solos and huge orchestrations really finish of the massive start of the Armageddon.”

Infiltration: “The war is on! Skin shedding brutality in the form of powerful growls and fast riffing. Cling to your bellowed weapons ‚cos the resistance will be devoured.”

Swallowed By Defeat: “The first Gloria Morti instrumental. A melancholic reminder that humanity will not overcome.”

Obey: “A crushing mid tempo song that deals with the fact that mankind has fallen into slavery in their futile attempt to solve all problems with weapons. Melodies and soundscapes that give you goose-bumps in the scary way.”

Cut From Gaia: “It has been written in blood that life tries to rise up and take control of the chaos. Evil sounding song with chords that remind you of the ‘Diabolos In Musica’.”

The Final Framework: “The final chapter is soon to be written. It is starting to get clear that there is nothing to do about the forthcoming Armageddon. Melodic and really driving song with a bit more sad mood.”

Redemption: “Mankind makes it’s most difficult decision. Nothing will be left behind… A song with beautiful melodies, hard hitting drum extravaganza and a touch of grimness.”

Chaos Archetype: “The „sum up“ of the theme. A dive into the reality of life in it’s purest form. A beautiful yet melancholic orchestrations that really brings your skin to shiver.”