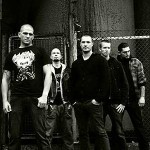 „Our last album „Funeral Phantoms“ is also viewed as the bands absolutely best release and we are proud to leave on the top of our career. With Funeral Phantoms we reached what we have always aimed for, so now it’s time for something new.

I’m also extremely proud to look back and be able to say that we never repeated ourselves, each album has it’s own sound and atmosphere, no  album is alike. That is very satisfying as an artist!!

So why stop now?

The motivation is simply not there anymore and I would never try and force something just to keep going and I’ve never found it especially interesting to repeat myself. I’ve been working on some new material with Andreas for a new band, but there is no guarantee at this point   that we will actually record anything, we would need the right people   and they are not easy to find here. Apart from that I’m involved in a   fully electronic project that is miles away from this genre.

Anyway, I’ve always been an entrepreneur and fiery soul, so life is simply too short to just focus on one thing, there is new territory to be discovered and I need to make new music. So this is the end of one  thing and the beginning of something new, whatever that will be.

Morten will still be active in Spectral Mortuary and Simon got Horned Almighty that will soon have an album out on Candlelight.

Kim is killing stuff and me and Andreas will be back eventually.

I would like to use this opportunity to say „thank you very much!“ to all the past members of the band, you are all part of the history of Exmortem and a big thanks to those we have worked with!! I would also like to say a big hello and cheers to all the cool people I’ve meet through this music…you know who you are…I’ve also meet a lot of not so cool people, but you probably don’t know who you are…

Throughout the years there has been a lot of rumors about this band…. and they are all true!“