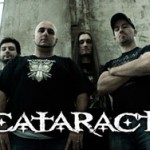 “Fellow Cataractians,
after sorting out the internet troubles we’re finally able to report on our fourth visit to the brand spanking new Antfarm Studios! We’re gonna keep the blah blah low and give you the raw and ugly truth of being a rockstar and having to bring something new into your music so the reviews will be raving.

Day 0, Sunday.
Drove up to danmark, whew. 12hours of germans slowing down whenever a truck, bend or raincloud approaches. Entered danmark, got fingered by the cops, just shortly though as we didn’t shower in the morning. Best thing about the drive – speed limit in danmark is now 130 on the motorways! Collected keys to our little home for the next two weeks, we rented a small house on the beach of danmark, about 20mins away from the studio. Turns out it’s a 4* holyday home with all possible extras (minus a working internet connection), so we’re really stoked and ready to go!

Day 1, Monday.
Finally, meeting up with Danmarks three time best metal proucer, Mr Tue Madsen (please don0t kill us for writing this). And one thing’s for sure. We love the new look of Antfarm!!! It’s got much more room, a kitchen, a swimming pool, a chill out area and a cinema (no joke!). so actually it’s a really nice place to stay, especially after recording. Okay what did we do? Not much actually. First off, our management failed to book some roadies to carry the equipment from the car into the studio, the we had to realize that our rider was disposed off. Since we’re dedicated to really change to world this time we spent all day making sure the electricity we use only is water and wind sourced. So this took a little while, especially because Tue thought we’re joking. We also managed to record some songs.”