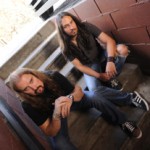 LABRIE sagt:
“The track ‘Mislead’ was a sleeping giant for Matt Guillory (keyboards) and I. Most of the parts came quickly, but seemed to be missing the key elements or ingredients that would keep you in its grip the entire ride. We kept playing with the interaction of the instruments and vocal melodies. Matt kept working his magic with the interplay of the keys, bass, guitar and drums. It wasn’t until I was almost ready to lay my vocals that Matt and I felt it had all that it needed, but we wouldn’t see the proof in the pudding until after both mine and Peter’s vocals were laid.
Peter’s vocals were done before mine which enabled me to feed off his energy and really nail the attitude and personality needed for this song. What began as one of the maybe, maybe not tunes for this disc. It ultimately ended up being one of our favorites. The lyrics I wrote deal with the ever present corruption and oppression in far too many governments. I know lighten up right, I’m light; it’s them who need to chill out. Enjoy.”

Guillory kommentiert:
“In the writing process, ‘Mislead’ ended up being more of a challenge than the other songs. It’s got all the right ingredients though; dense syncopated riffing, atmospheric keyboards, melodic hooks, and over-the-top vocals. In the end, we’re really pleased with the way it turned out. I absolutely love the contrast between James‘ crystal-clear lead vocal delivery and Peter’s melo-death screams.“